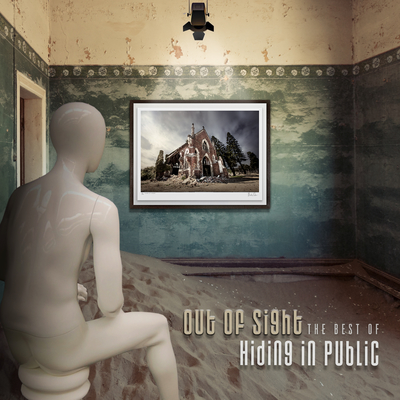 The best of Hiding in Public's pop/rock magic is now available on their new release "Out of Sight".

Hiding in Public features the soulful singing and tasteful guitar work of Jamie Moses. Jamie has been hiding in plain sight for years as one of the UK's top sidemen having toured with Queen + Paul Rodgers, Mike & the Mechanics, and Tom Jones. When not standing on stage at events such as the Queen's Jubilee or Nelson Mandela's 46664 concerts, he is Hiding in Public with veteran collaborators David Holland, Kevin Poree and John Tonks.

"Hiding in Public subscribes to the long lineage of British pop songcraft, starting of course with the Beatles but also the Small Faces and Squeeze," oozes Billboard and "displays the same unaffected yet sophisticated leaning of its predecessors."

Anyone who ever loved classic radio pop from the 1970s and 1980s is bound to fall in love with Hiding in Public.

Hiding in Public Release "Out of Sight (Best of)" Collection

After eight years of hibernation, Hiding in Public are releasing "Out of Sight", a re-mixed collection of its best tracks. The album features fourteen hook-laced tunes from the band's four albums of pop/rock magic which according to babysue.com is "some of the best pop music recorded in the twenty-first century."

"We had a blast revisiting our songs and trying to decide on the twelve best to put on the collection. We couldn't but succeeded in narrowing it to fourteen tunes which makes for an incredible listening experience," according to David Holland.

Not only were the songs re-mixed and mastered by Kevin Poree, some were retro-fitted with fresh lyrics, guitar magic and instrumentation. "We're not afraid of the challenge of making our best songs better," grinned Holland. "Fans will be delighted with the phenomenal sound Kevin captured in the new mixes."

"I couldn't be more proud of this album," beamed Jamie Moses. "We've taken the cream of our crop and blended them into one incredibly catchy collection of songs. You know when a band puts fillers on an album? Well you won't find any here. This really IS the best of HiP. So far."

"The release of this album has been a fantastic opportunity to re-visit these wonderful songs," explained Kevin Poree . "All the Hiding in Public material is a cut above. This Best of album, then, means something very special indeed: it's the best of the best."

Hiding in Public features the quirky, award winning tunes of songwriter David Holland, and the extraordinary guitar playing and silky, soulful singing of Jamie Moses. Jamie played second guitar to Brian May for over a decade and toured extensively with Queen + Paul Rodgers, Mike & the Mechanics, and Tom Jones. He is one of Britain's busiest guitarists with a voice that demands attention. John Tonks on drums and Kevin Poree on bass and keyboards round out the band. Guest appearances include Matheson Bayley and his one man orchestra, and Melvin Duffy on pedal steel guitar. The album cover was photographed and designed by Martin Osner.

Hiding in Public "subscribes to the long lineage of British pop song craft, starting with the Beatles but also the Small Faces and Squeeze," wrote Billboard and, "displays the same unaffected yet sophisticated leaning of its predecessors." Their thought-provoking, quixotic songs are loaded with radio-friendly hooks and retro twists. "Anyone who ever loved classic radio pop from the 1970s and 1980s is bound to fall in love with these tracks," enthused babysue.com. Exposure includes worldwide radio play, BBC radio performances, television use, and 1st Prize in the prestigious International Songwriting Competition for their song Worlds Away Yards Apart.

The album is available on all of the major streaming services including Spotify, Apple Music, Amazon Music and Tidal.

Out of Sight (The Best of)

Out of Sight features the magic of Jamie Moses and best of Hiding in Public on a freshly mastered album.

Anyone who ever loved classic radio pop from the 1970s and 1980s is bound to fall in love with Hiding in Public.